What Is Amanita Regalis?

Homepage blog What Is Amanita Regalis?
in blog February 3, 2022 by AmanitaStore

What Is Amanita Regalis?

Amanita regalis is a rare fungus in the family Amanitaceae. Up until the early 20th century, Amanita regalis was considered to be a variety of Amanita muscaria, but taxonomists classified it as a separate species. Nowadays, Amanita regalis is known by many different names like the royal fly agaric, the King of Sweden Amanita, and the Brown Fly Agaric to name a few. The mushroom is typically found growing on the ground in mountainous forests, both deciduous and coniferous and it is most commonly found in Northern Europe, Scandinavia, Korea, and Alaska.
Like all Amanita species, the bulk of the organism lies beneath the ground as a symbiotic partner to certain species of trees. It can be easily distinguished from its relative Amanita muscaria, but occasionally it is confused with the edible species Amanita rubescens and the toxic species Amanita pantherina.
Amanita regalis is considered a poisonous species as it contains ibotenic acid and murcimol, the same toxic constituents as Amanita muscaria and Amanita pantherina. Ibotenic acid is a powerful neurotoxin and psychoactive drug and murcimol is a psychoactive component that has hallucinogenic, hypnotic, and depressant properties.
Additionally, Amanita regalis can bioaccumulate high amounts of heavy metals and especially vanadium, a highly toxic heavy metal. 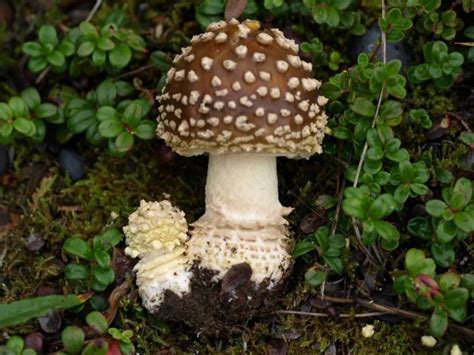